← Halt! I am Gravatar! @cbloggersproject →

a fortnight ago I ventured into strangely familiar territory. a land that your everyday people get very confused by… Armageddon firstly it sounds a bit daunting, and if you were walking past the Melbourne Convention Centre on that sunny weekend you would have thought that a Superhero Costume Party was going on. you’re walking down the entrance of the Convention Centre only to be surrounded by Batman, Spiderman, Mario and Darth Vader. I’ve walked into comic book, gamer and sci-fi nerd heaven. I look to my left and there’s Bill Farmer (the voice of Pluto) signing autographs next to John Di Maggio (the voice of Bender from Futurama) and I look to my right and there’s for some sort of wrestling going on.

I keep looking around and there’s people in costumes everywhere, I felt a tad under-dressed! this was probably the one place where people could get away with wearing lycra (hardly!) and carry toy guns and swords. in the photos below there is one of Boba Fett, now for those of you who aren’t huge Star Wars fans this guy is a bit of a bad guy and he was hired to kill a good guy… anyway the photo below is not one from the movie but in fact a Star Wars enthusiast, the crazy thing is, is that he spent $4000 (and no I didn’t put too many 0’s in) on the costume just to make sure he got it right. geez I hope he got his money’s worth!

anyway if you are a bit of a comic book, sci-fi or gaming fan this is the event for you. it’s an annual event and it’s definitely worth a look-see. if you’re “fan enough” each state has different panel speakers, this year I was lucky enough to see Bill Farmer and Ben Browder (I may have a slight crush on him!)

Commander Keen – and yes he’s in front of THE DeLorean 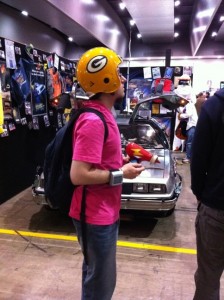 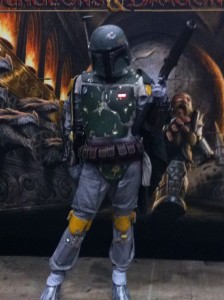