CBloggers Project, an initiative by JB and the Community Broadcasting Association of Australia (CBAA), invited 20 young people from around oz to converge on the national community media conference… the idea was to broadcast commentary using social media… yum had the absolute honour of being invited as the media training org and supported the development of an incredibly creative approach to the whole project…
This project has been about: engagement and innovation.

so at yum we began to build a model that might support the most demanding outcomes with the most amazing people …. our immediate reaction was this is a project about change, to get sustainable positive change you need innovation and engagement. the training delivery HAD to reflect that innovation.

our yum philosophy is that it’s not about the tools, as awe inspiring as they are…. it’s about the people… The model became training about change and innovation with a model of facilitators, mentors from YEC (Youth Engagement Committee), supporting some of the beset and brightest minds in media production from around oz. we delivered to free platforms to product image (flickr & YouTube), audio (ipadio and audacity), micro reporting (Twitter & Facebook), and reporting (wordpress blog). the cbloggers.org.au blog brought together all the other media that was created.

we started from the point that theses cbloggers are digital natives…. they know this stuff… what they maybe didn’t know was about how to create positive sustainable change back at their stations.

so during the conference cbloggers rediscovered jazzercise, conducted the jurgon hunt, did some phlogging about films, had some conference crushes, eventually we trended… it was inevitable…

however there was some serious stuff too… these cbloggers had been at work for weeks before the conference, setting up their personal accounts if they didn’t already have them and posting and engaging in online conversations – but more importantly talking to the people at their stations about change…

the ‘My Station in Change’ survey was about getting hold of the buzz three and their place in that buzz…. in our one day of training we worked together to take that buzz and shape it into what were the elements of change, why change??? – the cbloggers found four:

KNOWING, GROWING YOUR AUDIENCE
Reflecting your audience… Getting listener feedback… Targeting the younger demographic… Broadcasting where you audience live, and they are living online in huge numbers

TRANSITION TO DIGITAL
Who owns a radio?… Delivery… Going where your audiences are…. They are online so that’s where we need to be…

the cbloggers used these four reasons for change to filter their conference broadcast and you can see hear feel smell touch it all at CBLOGGERS ORG AU the cbloggers will continue to work when they get back to their stations as well, developing change strategies at their stations…. 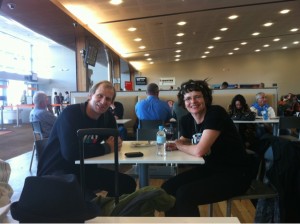 my 85+ dad just got an iPad, the tech has only just caught up with him – it’s not about age, it’s about energy and a fresh objective look at community media sector that young people provide us with… they motivate inspire and encourage us, they also thankfully entertain… and have provided outstanding conference coverage and reporting – please take some time to investigate it.

Cbloggers, not just an interesting exhibit in the corner of the room – but rather young people running with an idea unfettered, mentored by slightly older younger people, facilitated by older again media elders, we all learnt so much…