A Most Fabulous Film

The film of the year for me is one that was a complete experience. A cinema that dripped fabulousness, a film that opened my heart like a hot butter knife, a score that soared and trembled and wowed. ‘Blancanieves’ screened in the magnificent State Theatre in Sydney as part of the Sydney Film Festival 2013.

Written and directed by Pablo Berger this film totally took my breath away. It opened with a grand orchestral score that whipped our modern audience into a time-travel, feeling immediately at home. This is a language we understand. A silent homage to 1920s via ‘Snow White’ by the Brothers Grimm, though our Snow White is a matador.

The film moves through time, telling the tale of Blancanieves as a child, losing her mother, being banished by her step-mother, finding her father again before her memory is lost. Saved by a troop of dwarf performers she grows to be the woman her mother would be proud of, true to herself.

The lusciousness of the black and white film, an orchestral score to lift you into clouds then throw you against the sandy ground of the bull-ring. Berger does not shy away from the contentiousness of that ring, creating a glorious, respectful and beautiful spectacle. This is Spanish through and through, you can hear it and touch it and smell it. So beautiful. 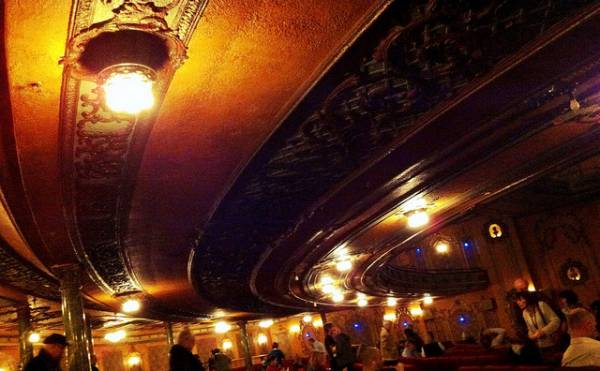 ‘The Stalls’ Image by Erin McCuskey

Berger called it a “love letter to European silent cinema”, and the love reaches out from the screen and surrounds an audience already in raptures. The cinema gave a gravitas to the screening that made us feel so involved, so part of it. We oohed and ahhed and yelled at the evil step-mother. And we reveled in a film that held us in a dream state.

Over at The Movie Show, Margaret loved it, she said “It’s very Spanish and at the same time it’s very universal.” David liked it okay, a tough customer (see him in flickr show below when I found him at SFF13, and then ran into Hugo, at least he ran into me).

Berger said “I think a movie’s like a paella, you put all of your obsessions in there.” And if you have had a great paella you will taste the passion, like you see it, and feel it here, with Blancanieves.

He also said “But for me Blancanieves is valid if it only serves as a terrorist act, to remind directors what makes cinema an art form – visual storytelling, editing, music, those elements that were dominant before ‘moving images’ became ‘talking pictures’. Talking pictures – what a horrible term that is.”